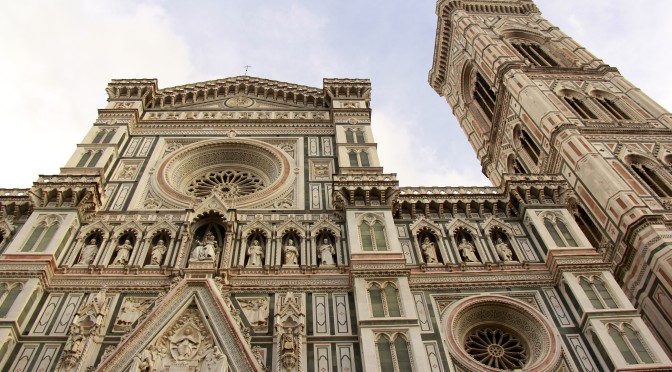 The Renaissance was a cultural movement that spanned three centuries and gave us some of the world’s most precious treasures.  It changed the way people thought, it altered politics and it had an impact on art and architecture that lasts to this day.  The exciting changes in art and philosophy reached across Europe and quite literally brought people out of the Dark Ages and into the light of a new era.  There is little debate about the birthplace of the Renaissance; nearly all scholars will agree that it is Florence, Italy.  Because of the city’s important impact on the world as we know it, as well as it’s own unique beauty – Florence is a city that everyone should see in their lifetime.  If those are not compelling enough reasons, Florence is in Tuscany – one of Italy’s most beautiful regions.

We recently embarked on a cruise aboard Celebrity Cruises new ship, the Silhouette.  We chose this particular cruise for a variety of reasons; among the most convincing was the itinerary.  We have wanted to visit certain parts of Italy, including Florence and parts of southern Italy.  The ports of call fit in with our “Italy bucket list” perfectly.  We spent two days (HERE and HERE) in the bejeweled city of Rome before we set sail and woke up the next day in Livorno.  Livorno is a port city in Tuscany that has access to some of the region’s most renowned cities.  Cruise-goers opted to visit Florence, Siena or Pisa or the smaller towns of Volterra and San Gimignano.  We always knew that we would venture to Florence; the only question was how we would get there.  If you read any of my previous posts from our summer cruise (HERE, HERE, HERE) – you’ll know that I am not a fan of booking daily excursions through the cruise line.  On a positive note, booking through the cruise ship is easier and they do offer some great itineraries.  But it is often five or ten times the cost of organizing the day trips on your own.  Armed with that knowledge, we bypassed the cruise’s tour buses and instead opted to visit Florence by train, given its far away proximity to the port city.

After over an hour on the train, we arrived in Florence eager to soak up the sights and the culture. My uncle had left us a great guide book on his previous visit, so we had a rough idea of how we wanted our day to evolve.  I bought a city map for a €1 from a guy selling them on the street and confirmed our route.  We first strolled through one of Florence’s main markets.  The city is well known for their leather goods and we wanted to see what they had.  As we continued our tour along the city streets, the sky decided to open up.  Our plan had been to soak up sights and sounds of Florence and instead we simply ended up getting… soaked.

After trying in vein to stay dry under the canopy of a shoe store, we decided that pushing on was our only option.  So we walked past the Medici Chapels and Basilica of San Lorenzo.  We strolled down the puddle-filled Via Cavour and arrived in the Piazza del Duomo.  The piazza houses three very important architectural triumphs.  Giotto’s Campanile (bell tower) is a showpiece of Gothic architecture.  The Battistero di San Giovanni (Baptistery of St. John) is one of the oldest buildings in the city, constructed in the Romanesque style.  The octagonal building once served as a Roman temple constructed to honor Mars, the tutelary god of Florence.  Today, the baptistery is most famed for it’s eastern doors, known as the “Gates of Paradise”.  Constructed of gilded bronze, the doors feature ten intricate panels that depict scenes from the Old Testament.  Most people don’t realize that the doors on display are actually replicas (the originals are kept in Museo dell’Opera del Duomo).  Even though they are not the “real deal” it is still amazing to behold the work of Lorenzo Ghiberti, a project that took him twenty seven years to complete and has been described by art historian Antonio Paolucci as “the most important event in the history of Florentine art in the first quarter of the 15th century”.

The third and most renowned attraction in the piazza is the Basilica di Santa Maria del Fiore or as it’s most commonly referred, Duomo di Firenze (Florence’s Dome).  Construction began in 1296 in the Gothic style and was finally finished in 1436 in the Gothic Revival style with the completion of the famous dome.  So much time had passed during construction that Gothic architecture had been all the rage, became “totally uncool” and then turned “retro and hip” again before the church was finished!  The construction of the dome was overseen by the famed architect and master goldsmith, Filippo Brunelleschi, spanning sixteen years (1420 – 1436).  Although, the history of the dome dates back much further – the commission was awarded to Brunelleschi in 1418 based off Arnolfo di Cambio’s original design of the dome, dating back to 1296.  In fact, the church was completed in 1380 with only the dome remaining incomplete (a period of 40 years stretched across the completion of the church and the start of the dome).  The main reason for such a long gap in time? Nothing had ever been engineered at quite this high level of intricacy and it took someone 40 years to come up with a good solution.  The end result is nothing short of an engineering marvel.  The design and construction of the dome is largely considered one of the first events marking the Italian Renaissance.  Together, the three structures in the piazza (the Duomo, the Battistero and the Campanile) are a part of UNESCO World Heritage Site, covering the historic center of Florence.

Next up was a visit to the Piazza Della Signoria and a visit to the Palazzo Vecchio (Old Palace). This impressive Romanesque fortress stands today as Florence’s town hall.  A replica of Michelangelo’s David stands at the front gates.  The original marble statue carved by the young artisan stood at the entrance from its completion in 1504 until it was moved in 1873.

We concluded our tour of the city by crossing over the Ponte Vecchio (Old Bridge).  To fully appreciate the bridge, you first need to learn a little bit about one of the most powerful families of all time – the Medici family.  The “House of Medici” was the preeminent Tuscan family that first attained it’s wealth and political power in Florence during the 13th century.  Their successes in banking and commerce cemented their wealth, while their philanthropic and political involvement garnered them prestige and infamy.  The family dominated politics, economics and culture in Florence for three centuries (15th to the 18th centuries) and provided the world with four Pope’s, two Queens and countless Dukes.  Through their banking empire they developed a significant improvement to the general ledger system with the development of the double-entry bookkeeping system for tracking credits and debits.  Their financial sponsorship of  arts and architecture largely funded the Renaissance itself, paving the way for advances never before seen.  The patronage of a young and inspired mind, Leonardo da Vinci gave the world some of our most prized treasures and significant cultural advancements.

So what did the Medici’s have to do with a bridge you ask?  You may assume that they funded it (and you’d be right – the reconstruction effort of 1345) and think to yourself… “what’s the big deal, Greg – you just told me they basically bankrolled the entire Renaissance, who cares about a single bridge”?  Well, in my opinion there are two very interesting things about this particular overpass.

First, the bridge is credited as being the birthplace of bankruptcy, an action the banking family supported.  The bridge has always housed shops and merchants (as it still does to this day) and when a merchant could not pay his debts, the counter on which he sold his wares (the “banco”) was physically broken (“rotto”) by soldiers.  The practice was thus referred to as bancorotto (broken counter, or as it became known, broken bank).  Once the merchant lost his table, he was no longer able to sell anything.

The second interesting factoid about the bridge also has to do with these merchants.  Butchers dominated the shops along the bridge, nearly since it’s inception.  In 1564, Grand Duke Cosimo I de’ Medici commissioned the Vasari Corridor – an enclosed passageway elevated above the Ponte Vecchio in order to connect the Palazzo Vecchio with the Palazzo Pitti.  The Grand Duke commissioned the bridge because he wanted a private walkway when crossing between his personal residence and the government palace – he couldn’t be bothered to walk amongst the commoners.  As if this was bad-ass enough… he took it a step further. The smell of meat was not a scent that he cared to inhale, so he had all the butchers removed and oversaw the installation of gold and jewelry shops (a tradition that persists today – there are nothing but gold and jewelry shops along the bridge… with a couple souvenir places sprinkled in).  The gold merchants not only offered a less offensive odor, they extended a much more pleasant view and enhanced the prestige of the bridge.

We got a few souvenirs for ourselves and then hustled back to the ship for a lot more fun at sea!

4 thoughts on “The City That Inspired the Renaissance”