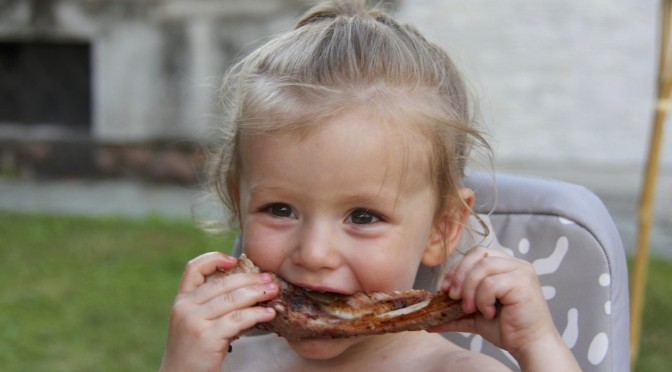 When our friends, Nathan and Danielle had come to visit this past spring – Danielle pointed at a unique outdoor-oven-with-a-chimney-thingy in a neighbors yard and asked what it was.  I replied with all the confidence in the world that it was an Italian-style BBQ, but in reality I wasn’t positive.  I had seen the smoke billowing through the chimney and I had seen many of these things in other neighbors yards – but I had never inquired about it.  I asked my “go-to guy for all things Italian”… Jen’s uncle, Franco.  He confirmed that it was in fact a BBQ and a fairly typical one in Italy.  So, my educated guess was right.  Whew!

I noticed shortly thereafter that the typical gas Weber grills we’re accustomed to using in the States are non-existent here.  In fact, it’s possible you may see a round charcoal grill – but more often than not, it’s one of these large, permanent fixtures that people use to grill.

Jen may rule the kitchen around here, but I’ve always loved to rock the grill!  As soon as I learned of this wonderful outdoor oven (it’s really more of a wood burning oven, than a simple grill) I knew that we absolutely needed one.  However, we live in a condo with other families and we needed everyone’s approval before one of these beauties could bask in our communal yard.  Franco became the champion of the project and pitched it at the very next board meeting.  The grill got a unanimous vote and so when Jen’s parents were here visiting, we went to acquire the grill.

Once again, I learned that things that are usually simple in the States (i.e. buying a car or procuring cell phones) is not necessarily the case in Italy.  Buying a grill requires many visits to the store, many discussions, lots of construction and many more discussions.  I was a little taken aback when Franco picked up cement and outdoor paint, realizing this was going to be a much bigger project than I originally expected.

After our second or third visit to the hardware store, Dominic purchased the grill and we loaded it onto a friend’s truck.  He helped us deliver it to the building and we carried the unbelievably heavy grill, piece by piece into the yard.  A week or so into the project and we were only marginally complete.  The grill lay disassembled, piles of cement and stone until we all returned from a quick jaunt to Scotland.  By the time I was finally able to roll up my sleeves and start slinging cinder blocks – Jen’s parents had boarded a plane bound for the States.  Sadly, Dominic never got to enjoy the BBQ that he helped acquire.  That certainly didn’t stop his brother, Franco from encouraging me to send him images of our first festa (party).  Brothers will be brothers!

The first party we had was a blast.  Our neighbors below are from Naples – and boy, do they know how to party.  They had extended family show up and bring delectable treats with them.  I was pushed away from the grill as Aurelia and her husband, Stefano took over.  As I watched a jaw-dropping amount of meat depart the grill – I was glad I had been sent to the sidelines.  I know now that I was out of my depth.  We feasted on pork ribs, beef ribs, lamb, porchetta, speck and various types of salsiccia (sausage).  Our waistlines thanked us for the grilled vegetables – eggplant, zucchini, peppers and more.  We devoured homemade salumi and cheeses that kept appearing each time I turned around.  Of course, the cheeses were from all over Italy (“this is from Veneto… aged 24 months” or “my grandmother made this in Napoli… it stayed under ground for 36 months”).  Hours later, the desserts (insert image of the best homemade tiramisu’s I’ve ever had) and then the coffee appeared.  This was quickly followed by round after round of grappa (homemade, of course).  All this – and it was just a first of many parties!

Since then, we’ve had many more outdoor parties – including a pizza party, where all the Napolitane baked their own bread and made pizza from scratch.

When my parents were here visiting, we decided it was another good time for a BBQ.

Another time, we wanted to bring all the family together and so all of Jen’s cousins came for a festa.

I’ve used the grill for a simple meal for the five of us (myself, Jen and Julia along with Franco and Claudia) and not to be outdone by any Italians – I got about three times more meat than necessary.

All told, we’ve had a wonderful grilling season and while I’m anxious for the fall and then winter – I’m already looking forward to the time when I can dust off the ol’ tongs and have another Italian-style BBQ!

One thought on “Step Aside… It’s Time to Grill!”