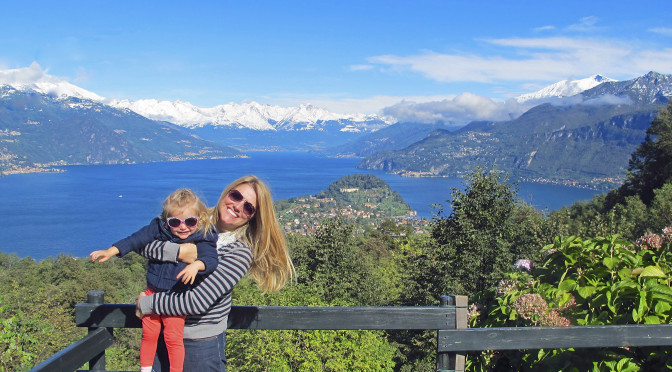 Jennifer, Julia and I had a wonderful time when my Uncle S and Aunt Deborah came to visit us this past March.  That’s why we were thrilled when they mentioned that they would like to come back to Italy again this fall.  They wanted to do a bit of traveling and invited us to join them on their adventures, using our condo in Como as a “home base”.  They had sketched a rough itinerary and just wanted a little help filling in the blanks – assistance I was happy to give.  They knew that they wanted to spend some time with us here in Como, some time in Piemonte and Emilia-Romagna (two regions adjacent to our region of Lombardia) as well as a quick jaunt down to the historically significant city of Pompeii and another to Venezia.

Jen and I share the responsibility of planning our trips – researching restaurants, activities and hotels.  But they’re usually in three or four day stints and one location at a time.  This time, I had to navigate through a two week itinerary, complete with activities, restaurants, hotel stays and all at new locations each day.  Putting the puzzle pieces of their trip together was a challenge not for the faint of heart.  Jen and I dug in, and by the time S and Deb landed in Milan, we had an itinerary that we were both proud of.  I think all of us agreed that it came together quite nicely.  Of course, the key ingredient was the company, mixed with a little food and wine!

We divided the trip into the three things that Italy is best known for.  Part I was wine.  Part II was food.  And part III was history.  Jen and I accompanied S and Deb for parts I and II (our personal favorites) and let them venture off on their own for part III.  This clean break in adventures divided the trip quite nicely and will also allow me to easily organize these blog posts into two parts.  Easy breezy, vino-squeezy.  However, before we hit the open road, we spent a day here on Lake Como in one of our favorite towns – Bellagio (if you’ve been reading this blog for a little while, you’ve seen us here many times before).  The unique beauty of the town is like nothing else on the world.

Piemonte (Piedmont) is a region in northwest Italy that borders France to the west and [our region of] Lombardia to the east.  The capital city of Piemonte is Torino, which was once the capital of all of Italy and the springboard for the unification of the country.  Of the twenty regions in Italy that each produce wine, Piemonte is probably the most well-renowned for their vintages.  The rolling hills and mild climate result in some of the world’s best wine – the Barolos and Barbarescos produced here are often the prize jewels of wine cellars the world over.   These wines, made primarily from the nebbiolo grape age very well, and in fact improve and develop richer and more powerful flavors as the decades pass.  It was easy that to recognize that this portion of our trip was going to be entitled simply, Vino (wine).

We spent the first day of our road trip in the small village of Barolo.  During our drive to Barolo, S imparted some of his knowledge about the famous wine, which I’ll now share with you.  Historically, Barolo wines were very rich on tannin and therefore could require as many as ten years to soften enough to drink.  The long fermenting time and aging process in large, wooden barrels causes this complexity in the wine.  The problem with this method is that it is very time-consuming and therefore expensive.  A newer breed of producers have cut the fermenting time by as much as 2/3 and age the wine in smaller, French oak barrels.  This allows the consumer to drink the wine much earlier and appeals more to the more modern, international palate (it creates a fruitier wine).  As an aside, the more modern palates that prefer “big”, fruitier wines is often attributed to world-famous wine critic, Robert Parker (often referred to as the “Parkerization” of wine).  The differing styles in Barolo has created a controversy between “old” and “new” – a conflict often referred to as the, Barolo Wars.

After a wonderful lunch at Osteria Cantinella, I had pre-arranged for a tour and wine-tasting at Marchesi di Barolo.  This particular cantina boasts a very genuine and interesting history (I encourage you to click on the link and visit their website).  It was explained to us that this particular winery was where Barolo itself was born – we even saw the original cask that was home the world’s first Barolo over 200 years ago.  Our tour began in one of the cantina’s vast rooms where they were aging wine in botte di vino (wine casks).  These barrels were made from oak from several countries.  S and Deb saw some of the barrels were made by an American cooper (barrel maker) they know in Napa Valley.  Small world!  We next moved into the Marchesi’s private family cellar, where an impressive collection of wines rendered us all speechless.  As we descended down into the heart of the cantina, we saw the juice of fresh “crush” flowing though long winding hoses, attached to the floor above where tractors were dumping the grape fresh from the “harvest”.  This was exciting for all of us, knowing that we played a small part in the 2014 vintage (primarily by not tripping over the hoses and spilling the precious nectar on the floor).  After the tour, we enjoyed a tasting of some of their finer wines – a wonderful way to casually spend the afternoon.

But we weren’t done – we still had another tasting on the books.  We next went to Borgogno – a producer of fine wine since 1761.  We opted for the more comprehensive vertical flight, consisting of six different wines.  I cannot accurately describe to you the pure bliss one can discover whilst sipping on some of the worlds best wines, with fun people who’s company you really enjoy and basking in the glory of a napping baby.  We tried our best to “play it cool” but I think perhaps got a little rowdier than we even realized.  You have to give us a break, we had each had several glasses of wine at this point.  Between me and S (mainly, S) – we bought so much wine that they included two of the four tastings and threw in canvas bags, custom wood cases and bottle openers.  If you find yourself in Barolo – duplicate our exact schedule of eating and drinking – it was an amazing day.

For 83 years, Alba has been host to the Fiera Internazionale del Tartuf Bianco d’Alba (International White Truffle Fair of Alba).  This year, the festival is open for five weeks, from the 12th of October until the 17th of November, spanning across the entire city.  There are hundreds of events (including a donkey race, music concerts and food & wine tastings), vendors set up in markets throughout the city, celebrity chefs dropping in all over town, cooking demonstrations and of course – thousands upon thousands of truffles.  Admittedly, we were undertaking a “food” related activity in the “wine” portion of our trip – but we have learned that nothing pairs with the worlds most exquisite wine better than one of the world’s most elusive and desirable food items.

Like many of the world’s finer foods, a truffle may seem strange to many people (caviar = fish eggs, foie gras = goose liver, etc.).  A truffle is in fact, a fungus – but nonetheless, affectionately referred to by many as the diamond of the kitchen.  It is no wonder that this event is considered the Sundance Film Festival of the culinary world.  The likes of Mario Batali, Joe Bastianich and dozens of other celebrity chefs make appearances each year.  Lesser known restaurateurs can be seen in the main truffle tent, intently smelling every single truffle and purchasing thousands of euro’s worth of this little, spongy item.  They will use the ingredient in various recipes (soups, stews, meat dishes and anything else their creative minds can concoct), but primarily – they will shave the truffles over pasta, table-side.

Truffles are small, hard to acquire and require the perfect soil conditions to achieve a proper balance. Italy is regarded as the foremost area for the natural cultivation of truffles (and the ultra-elusive “white truffle” grows in the Langhe area, specifically Alba as well as Tuscany and Abruzzo).  As popularity and demand has increased, other countries have tried to cultivate white truffles (including Slovenia, Croatia and now even China).  It is commonly accepted that these areas produce a lesser-quality truffle.  One of the benefits of purchasing your truffles within the main enclosed tent at the festival is that you are guaranteed a certified, locally cultivated truffle.  Many of the merchants selling their truffles were the actual farmers themselves.  Today, farmers mainly use Truffle Dogs to sniff out the truffles.  Historically, Truffle Pigs were used (because of their acute sense of smell and innate ability to find truffles) – but their love of the delectable treat often had them eating the merchandise before the farmers could snatch them from their snouts.  The Truffle Dogs have to be trained to find the goods, but are much easier to control.  We sniffed out some of our own truffles and plunked down €50 to acquire two small truffles and a truffle shaver.

Our final stop in Piemonte was a visit to Asti, a city that has been occupied since the Neolithic Period and today boasts a population of about 75,000 inhabitants.  Unfortunately, we caught the city on a Monday… during lunchtime.  This meant that virtually every museum, shop and attraction was closed.  We ate a makeshift lunch of pizza and flatbread on park benches before heading for home.

A couple days later, we took our prized truffles out of the refrigerator and cooked tagliatelle con olio with shaved truffle.  It was a delicious lunch that nearly put us in a content, comatose state – a good way to tease our pallets for Part II of the trip.  We would depart the next morning for Emilia-Romanga.  If Part I was entitled Vino, then Part II of their trip would definitely be called Cibo (food).