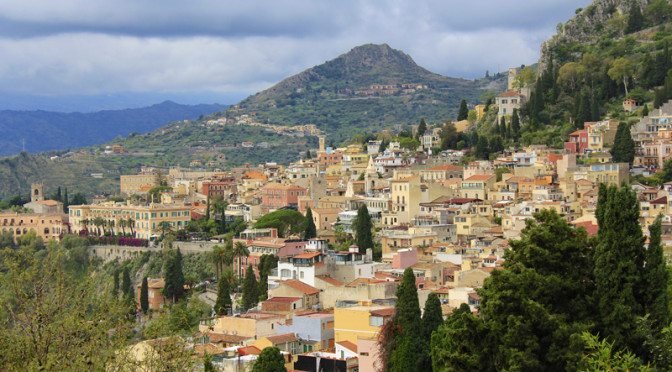 Sicilia (Sicily) was the birthplace of the original Godfather, Don Vito Corleone; its shores harbored his son, Michael Corleone and recently the island hosted Don Greggorio and his small family.  My only disappointment in visiting Sicily was that my wife, Jen wouldn’t let me wear a white suit and hat while walking around passing out fruit like I was Don Vito himself.  Oh well, there’s always next time…

I was so excited to visit Sicily because I’ve wanted to see this unique part of the country for as long as I can remember.  This region of Italy is so far south from where we live that I wasn’t sure if we would ever get the opportunity to explore the island while living here.  Sicily boasts a plethora of interesting facts that I couldn’t begin to detail in a single post.  However, perhaps the most interesting few points are that the island is the largest in the Mediterranean, archeological evidence dates human inhabitants are far back as 8,000 BC and the terrain has changed hands dozens of times (from Greek to Byzantine to Roman and all over again and again).

While the capital city of Palermo is the largest and most populous on the island, Catania is another popular tourist destination and the port city that received us on our visit.  The city also bore nostalgic significance – Catania was the birthplace and home of Jen’s bisnonna (great-grandmother), Rapisardi.  Even though there is plenty to do in Catania, we decided to take the hour-long train ride up the coast to Taormina.  We were not the first to make this journey – Taormina has been one of the most popular tourist destinations in Sicily since the early 19th century.  However, we came at a particularly interesting time.  The infamous Mount Etna had just erupted a couple of days before our arrival and evidence of the black soot was everywhere.

The rapid expansion of Taormina is believed to have begun around 345 BC.  It originally started as part of the Greek empire before falling into the hands of the Romans.  Today, the city remains high atop the ridges of the coastline, commanding a beautiful (and strategic) view of the sea.  Before we could walk her ancient streets, we had to ascend the long and winding roads from the train station.  We secured ourselves a cab and helped some other non-Italian speaking tourists get cabs of their own.  Since there were more people than cabs, I offered to share our cab with a German couple.  I arranged a pick-up time with the same cab driver at a discounted rate.  Not only did we get to split the fare, but we got a discount by giving the same guy round-trip business.  I’m always happy to find good travel deals!

Upon arriving in Taormina, we spent some time walking around, soaking up the lovely street scenes.  Eventually, we wound our way to the Teatro Antico di Taormina (Ancient Theatre of Taormina).  The amphitheater is a fine example of Greek engineering that dates to the seventh century BC.  What is most fascinating about this theatre (apart from its spectacular position overtop the Mediterranean) is that the use of brick in its composition hint at Roman construction (an era much later than the seventh century BC).  But the design is that of ancient Greece.  This architectural style in combination with other archeological elements has  unfurled the prevailing theory that the Romans rebuilt the amphitheater overtop an existing Greek theatre.  Today, the preservation of this ancient wonder is truly remarkable.

After quite a bit of time exploring the amphitheater, we strolled through the city streets, marveling at the beauty behind each turn. However, we had more on our minds than just lollygagging.  We were bound and determined to try arancini, which are essentially balls of fried rice.  Of course, there is oh so much more to it than just that!  This local Sicilian treat dates all the way back to the 10th century.  The perfectly fried balls of heaven are often times stuffed with ragu, pancetta, cheese or other treats.  We got a simple variation, just risotto fried lightly beneath breadcrumbs – we couldn’t be happier with our decision.  I’ve included a link to a recipe HERE, although we haven’t tried to make them ourselves yet.  We’ve since eaten arancini in other parts of Italy – but it’s never quite as good as it was that day in Sicily.

We took our final walk through Taormina and back toward our departing ship.  We had one last port to round out our time at sea – a day in the historic city of Naples.