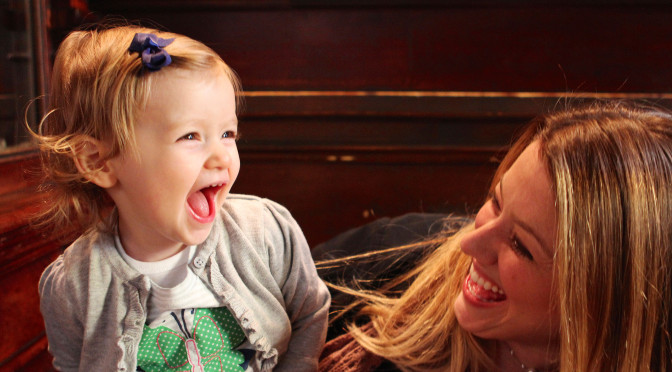 Day three in Dublin brought no less excitement than either of the first two days.  If you haven’t read about the first couple days and are interested in reading about this wonderful vacation in sequential order, you can read about Day One HERE and Day Two HERE.

We had booked a return from Dublin on Monday morning so that we could enjoy the famous Saint Patrick’s Day Parade and all the corresponding festivities on Sunday.  We had heard for quite some time that the People’s Parade was a wonderful sight to behold and that we should arrive early.  Fortunately, our hotel was directly along the parade route.  Even more fortunate was that we were given a room with a direct view of the parade.

Jen continued to tell me from the moment we woke that we needed to be standing along the parade route early.  Everything she read said that should stake our spot at 9:00am for a 12:00pm start.  I was far less excited about standing dormant for three hours with a toddler.  And I’m notoriously famous for playing the risky game of “see, I was right” (me) versus “I told you… you never listen” (her).  I lost track of the score years ago, but I’m willing to bet I’m in the lead.  Unfortunately, I lost a point in this round.

I had convinced Jen that the light drizzle would delay people’s arrival.  I also reassured her that our pivotal view of the route would allow us to descend from our room and claim a prime spot as soon as the crowd grew.  My theory proved to have merit when I checked the window at 10:00am, only to see a few stragglers standing by the gates.  Twenty minutes later, I glanced down again – not expecting much change.  I was wrong.  The first row was already full and a second row was filling up quickly.  We rushed to adorn ourselves in green and headed down – just in time to sneak a 2nd/3rd row position (depending on which way the crowd was swaying).

This was the first year that the famous parade opened it’s gates to people from all around the world.  8,000 participants from Brazil to Finland, New York to Hong Kong created their own floats and costumes to symbolize the pride they had in their customs and traditions.

We watched the parade from the street for about an hour – but soon decided a little sitting and Guinness should be on the menu.  I took Julia to the room while Jen ordered a couple of pints from the hotel bar.  We had a great view of the parade and with the space to spread out – Julia couldn’t help herself from dancing.

We were thrilled that we got to see the parade at street level, but I think we were all thankful that we were able to also watch from the room and still join in the festivities.

After the parade wrapped up, we walked across the street to the Temple Bar area for lunch and another pint.  Not a good move on Saint Patrick’s Day.  Temple Bar is the “party” district of Dublin and the atmosphere was that of 1,000 fraternity houses melded into one.  We couldn’t find anywhere to eat and had to settle for the only quiet place we could find.  A wonderful restaurant that served the exact type of food you want to eat when you’re in Ireland… Chinese food!  It certainly wasn’t part of the plan (I would have happily eaten fish and chips for every meal) , but it worked out just fine.

We walked for quite some time more and crossed the river toward the northern end of the city to get away from all the chaos and explore some new areas.  We thoroughly enjoyed ourselves, but admittedly we longed a bit for the carefree fun of our youth – what with all the rebel rousing around us.  We were just about to walk into the Brazen Head, Dublin’s oldest pub (est. 1198) when the line instantly tripled (one in one out).

We continued on and found a quiet, out of the way pub.  It certainly didn’t have the atmosphere we were looking for (it actually looked rather boring) – but we could rest assured no one would try to use Julia’s head as a coaster.  By chance (or Irish luck), I decided to poke my head into one last pub as an alternative option.  I came out with a grin from ear to ear.  “Jen, come on!  It’s a pub for kids!”

It really wasn’t a pub for kids… but the loud music we heard blasting was for a kids dance competition.  And the candy they were passing around was for the kids.  And the cider they were offering was for the kids.  And everything else was for the adults!  What a perfect place.  It turns out, we found a locals pub and they were hosting a place for families to participate in the partying without having to leave the kids behind.  Everyone was so sweet to Julia, she instantly made friends.  We also made friends with a nice Irish lass, Victoria and her mother.  We enjoyed talking to her, and pretended to understand her mother.  Even though we spoke the same language – we were far apart in accents.

We finished our final day in Dublin completely content with our trip.  The only regret was not booking a ticket to stay longer in Ireland.  We both eagerly agreed that we would happily come back to one of our new favorite cities.

2 thoughts on “Mardis Gras’ Got Nothing On Dublin”